Making it up as you go along

This was quite an interesting process as it was done at a time I had little experience with architecture and pre-vis (or pre-viz, or previz, or whatever). For those that don’t know, it is a way of plonking a 3D model into a real world picture using GPS survey data and data of the camera and lens to get an accurate representation of what is being proposed. 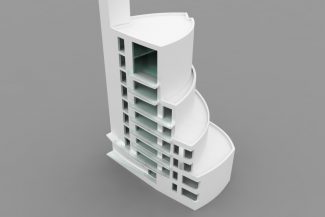 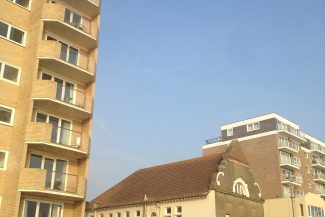 Take a photo and GPS data… 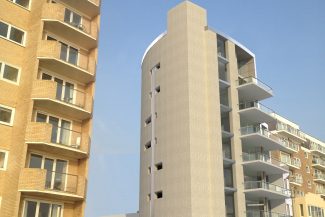 Put it all together.

I had to get hold of a surveying team who visited the site with me. We wandered around and I set up the tripod at some pre-agreed locations (where local residents had expressed concern) and we went about recording the data of every photo I took. They were quite fascinated by it all, and it was rather expensive to be provided with a few coordinate details, especially when the whole photographing and recording process took about 15 minutes. I’m sure there’s an app that can do it now.

The end result proved a number of things thankfully. Most importantly that the building wasn’t as imposing as some had feared, that it’s height was the same as the neighbouring building and that it didn’t ruin the “scape” (or some other wanky word) of the road. Regardless of this, the proposal never got approved and I think Dave Gilmore lives there now.

It was a complex thing to do at the time. Creating a work flow for something I hadn’t done before, and everyone else hadn’t heard of. It took longer than it should to put together, but ultimately taught me how to do it efficiently next time. A few years later and knowing what I do, I can’t see the whole process taking more than a week from receiving the GPS data to final images.

So if you’re in the Brighton and Hove area and in need of VVM (Visually Verified Montages for those who have already forgotten) get in contact!